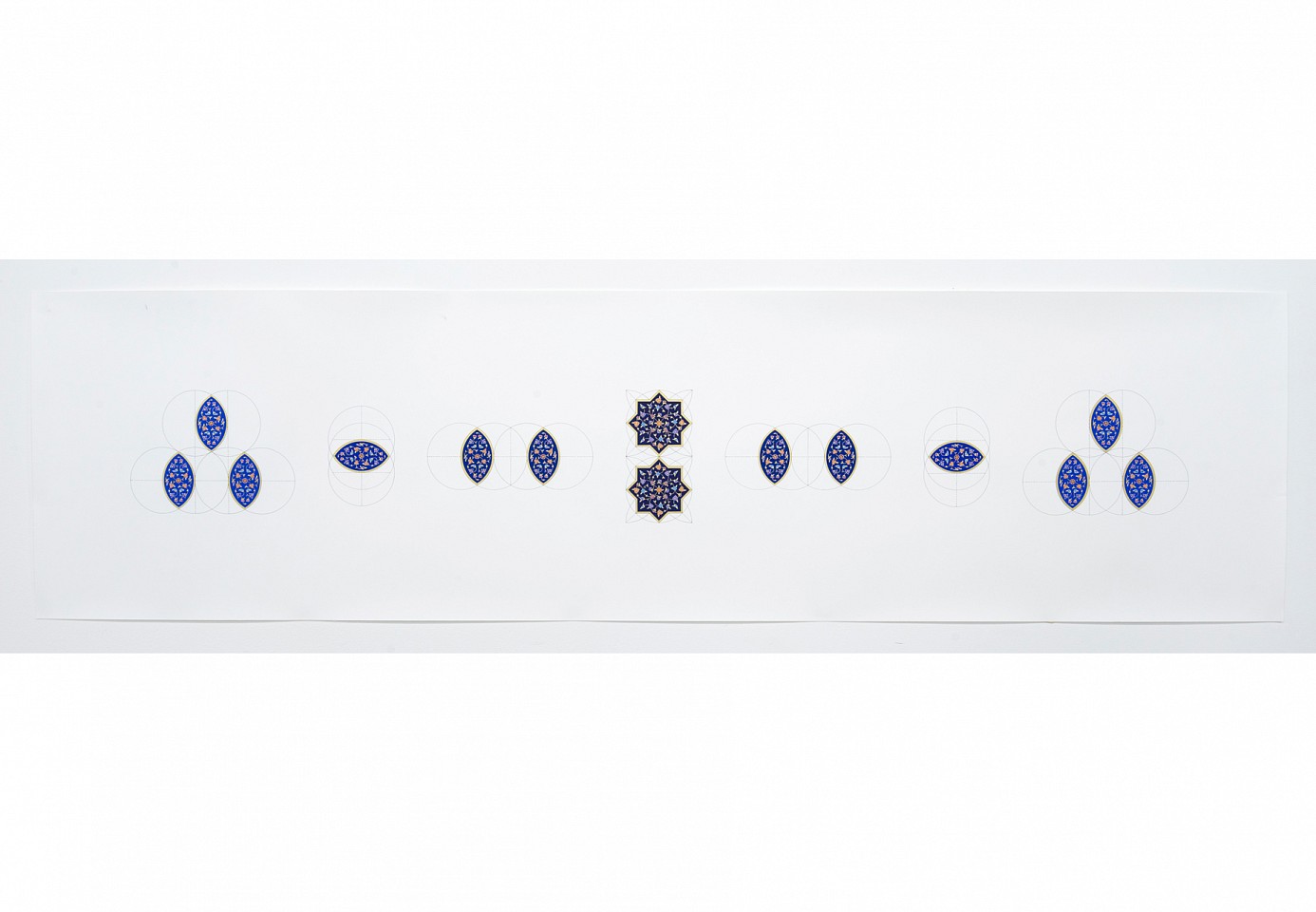 Mercury from the Heavenly Bodies series, 2015

Mercury from the Heavenly Bodies series, 2015

In this piece, Awartani is exploring the subject of “Palindromes” which are words, phrases, numbers or any other sequence of characters that when read backwards or forwards are the same. Palindromes in essence are a form of wordplay that has been used for many centuries dating back to at least 79 AD and the word is derived from the Greek palíndromos, meaning running back again (palín = AGAIN + drom–, drameîn = RUN).

Awartani has been researching the use of palindromes in the Arabic language, more specifically in the Holy Quran, where there only exist two known palindromes that make up one of the many linguistic miracles that can also be found. In this piece she has focused on a verse from Surah Al-Muddaththir (The Cloaked One), which reads as ‘rabbaka fakabbir’ (And Your Lord You Should Glorify, Quran 74:3). Here, reading the sentence backwards including vowels would not create a palindrome. However, taking out consonants only (which are here: r, b, k, f, k, b, r) can clearly create a palindrome.

Continuing with here research and experimentation with developing codes, Awartani has taken the practice of palindromes a step further by converting each letter of the sentence into there numerical value using the Abjadia and then into a symbol that embodies that number. In turn the viewer can decipher this code by firstly looking at how many points/angels each design has and then by looking at how many times that design is multiplied you can tell how many units are in the total sum of the individual letter. As for example the letter “Ra” is expressed by a design that has 2 angels and is painted 3 times which translates into 200, the letter “Ba” uses the same 2 pointed design and is painted once which translates into 2, and the letter “Fa” is expressed using a design that has 8 points and is painted twice, which translates into 80 and so on and so forth.

The Heavenly Bodies series combine Awartani’s research into both talismans and Enchanted squares, in particular an investigation into how they were created, used and their spiritual significance. Each of the central squares (from 3 to 9 squared) are affiliated with one of the seven classical planets, a day in the week and an angel – they were also once regarded as a form of protection as well as a source of higher spiritual knowledge through numerology. These works, created using traditional methods and pigments, are structured based on the first square, which sits at the top right of the work and holds the code to deciphering which planet has been illustrated.

Where once these coded paintings might have been used as designs for weavings on clothes, here they work as illuminations, with each of the seven works exploring form, pattern, numerology and mysticism, functioning almost as a manifestation of the artist’s explorations into the threads of divination in ancient Islam. By bringing these early practices into a contemporary and increasingly globalized context triggers questions surrounding the possible reversion to more instinctive rituals along with possible reinterpretations of the Qu’ran.

Athr presents artist Dana Awartani’s most recent projects. The four projects are intertwined by their exploration of ritual as gestures within which geometric and organic forms that sit at the centre of a set of performed sequences acted out on paper and cloth. Each project questions the formalist and invariable interpretations of the Qu’ran prevalent in the Saudi judicial systems that sit opposed to more liberal undercurrents within contemporary Saudi society. The artist works with coding and geometric forms, including pre-Islamic talismanic designs and systems, to delineate her own process. For Awartani, who is studying towards her Ijazah (The grant of permission represented by a certificate to indicate that one has been authorized to transmit a certain subject or text of Islamic knowledge), knowledge and understanding of the Qu’ran is implicit to her practice. She uses this to draw out and challenge underlying assumptions associated to the Islamic faith, plucking out rituals that straddle religions and behaviours, expounding their inherent possibilities across a multitude of neutral contexts.