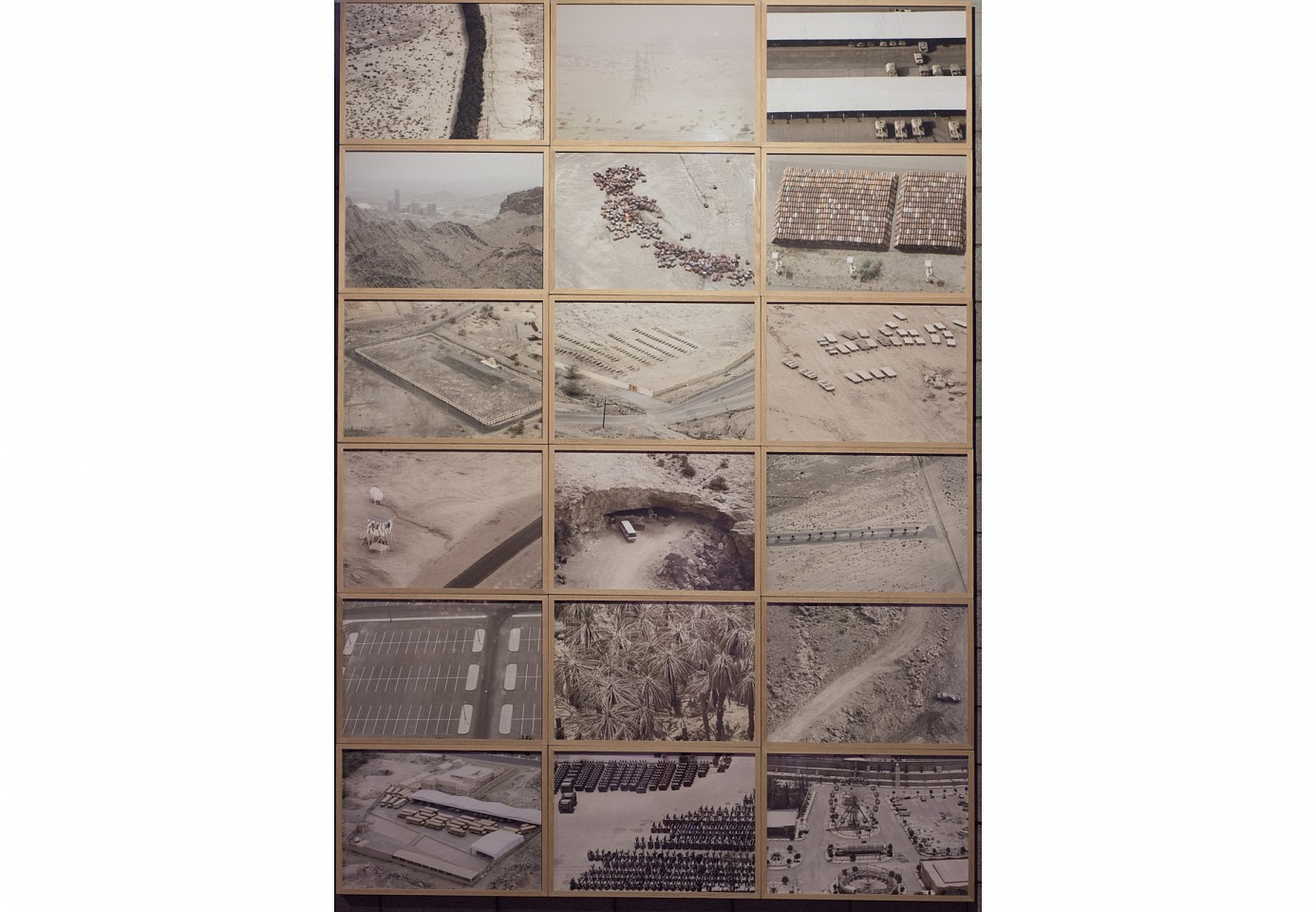 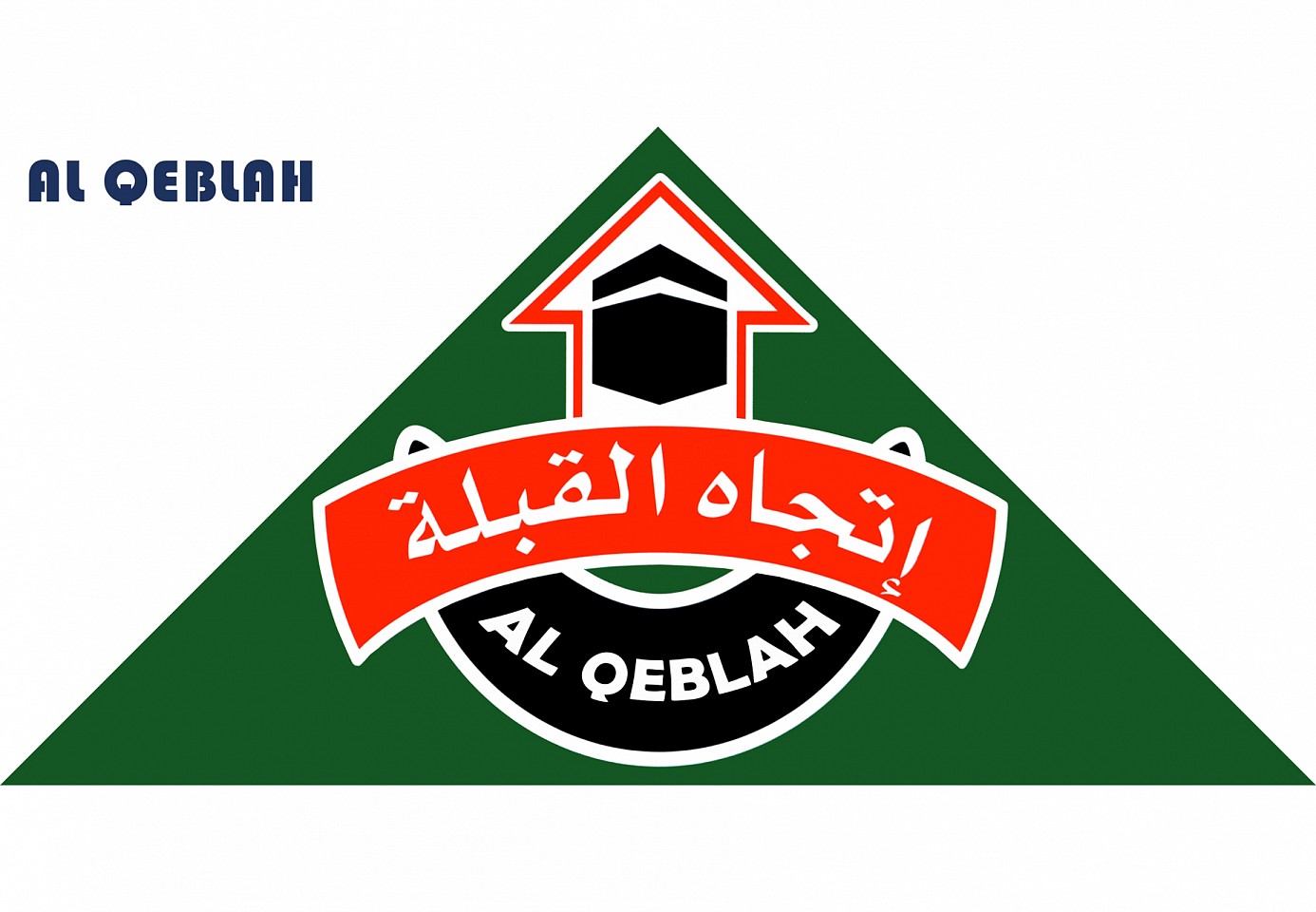 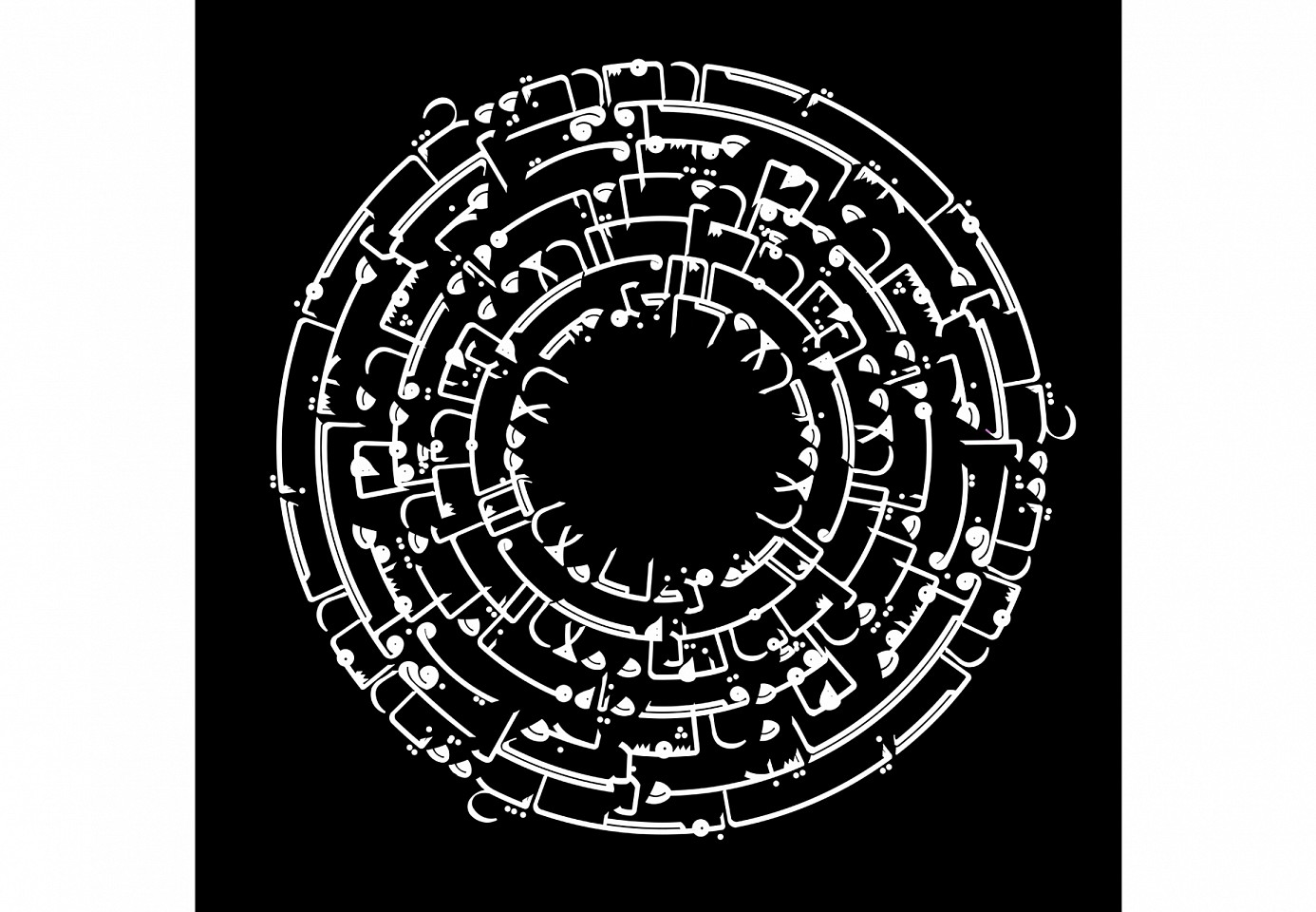 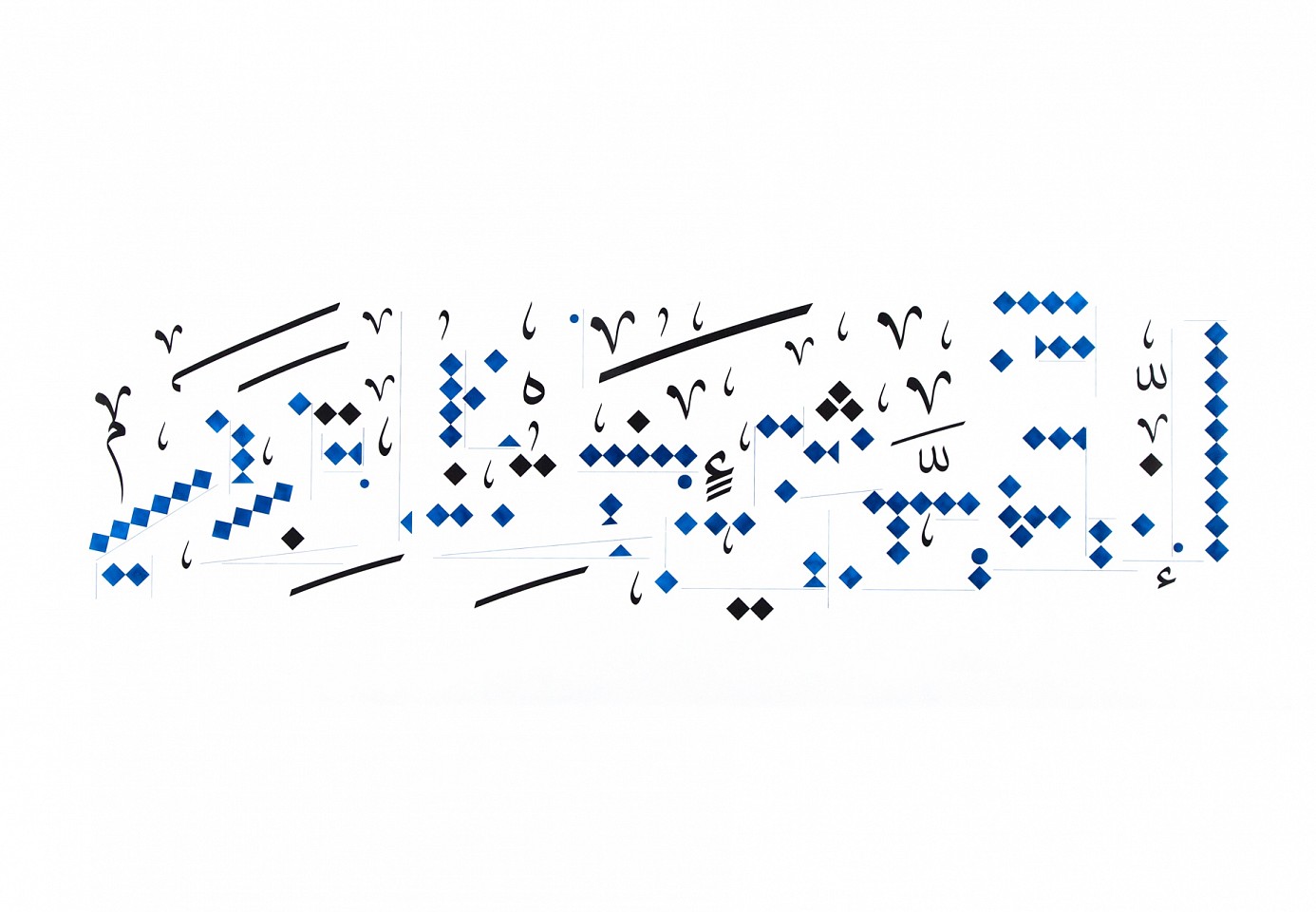 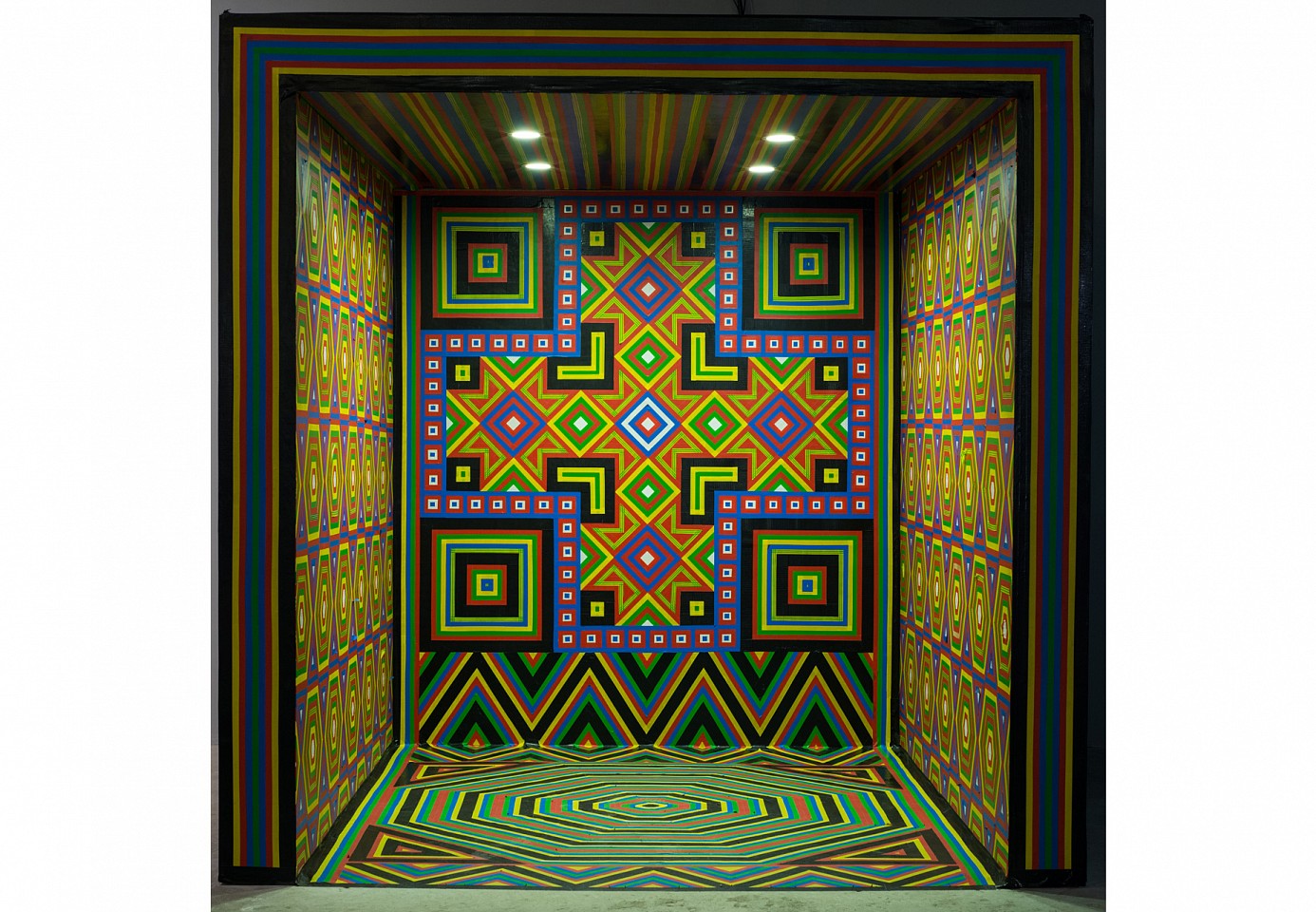 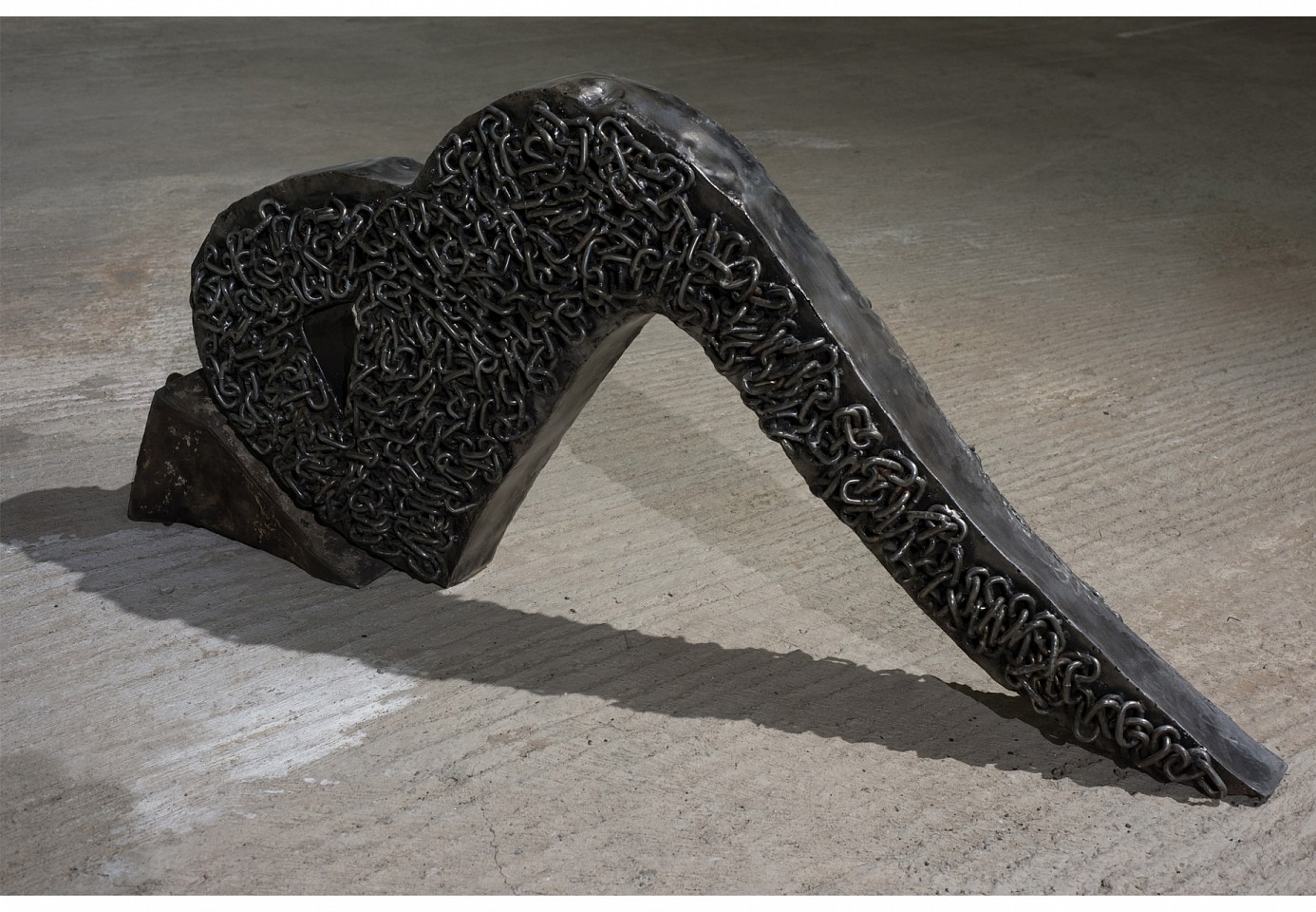 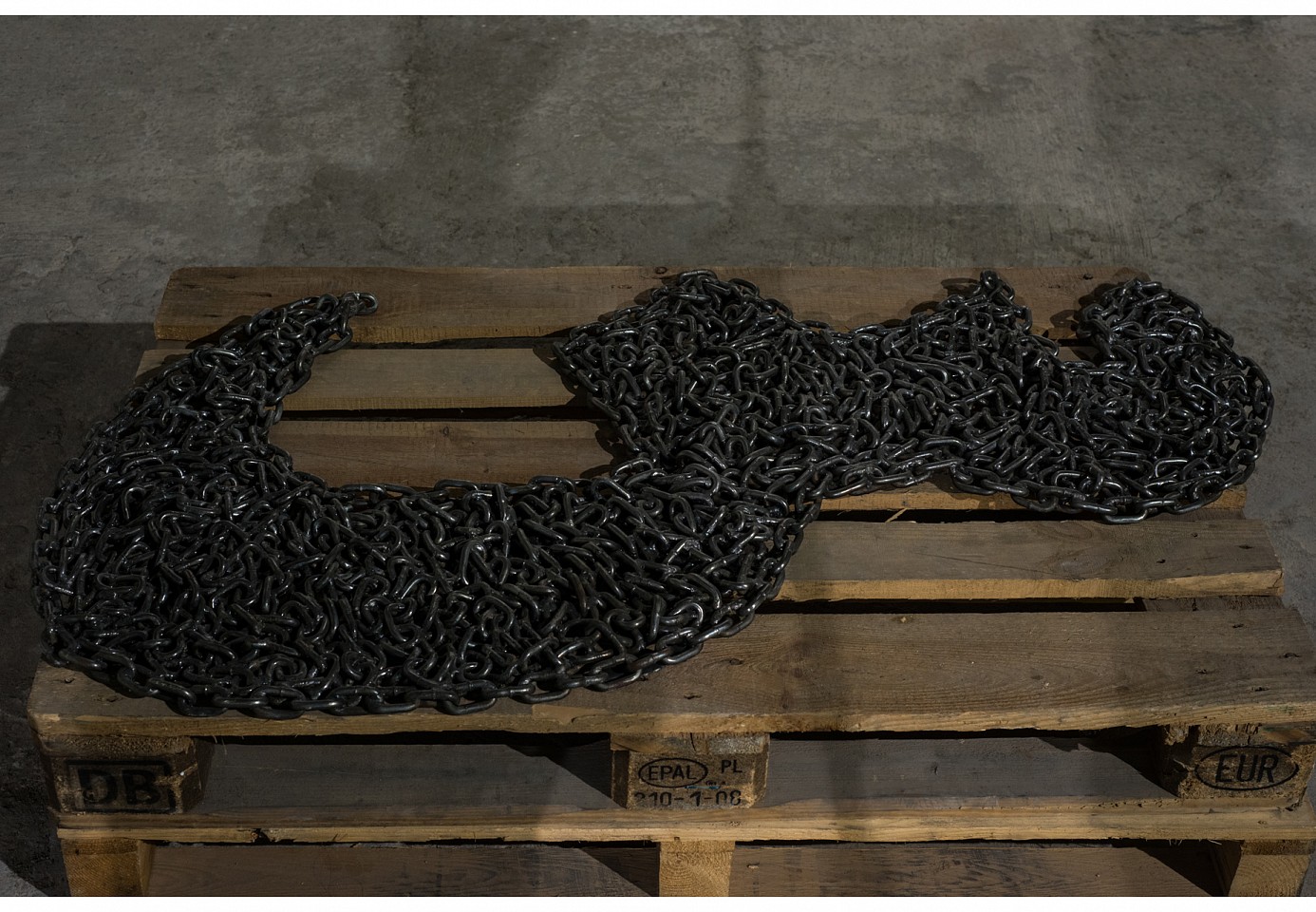 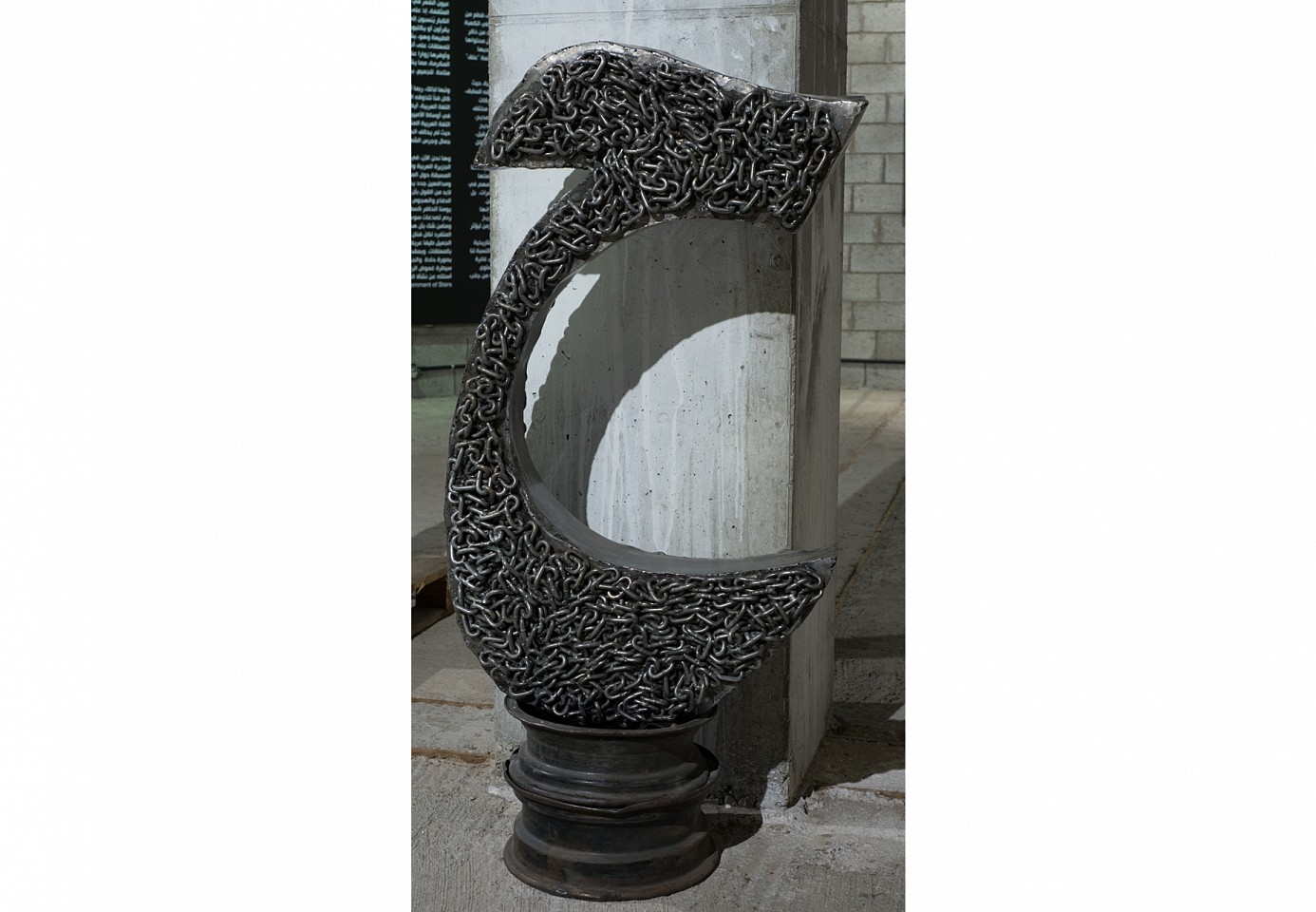 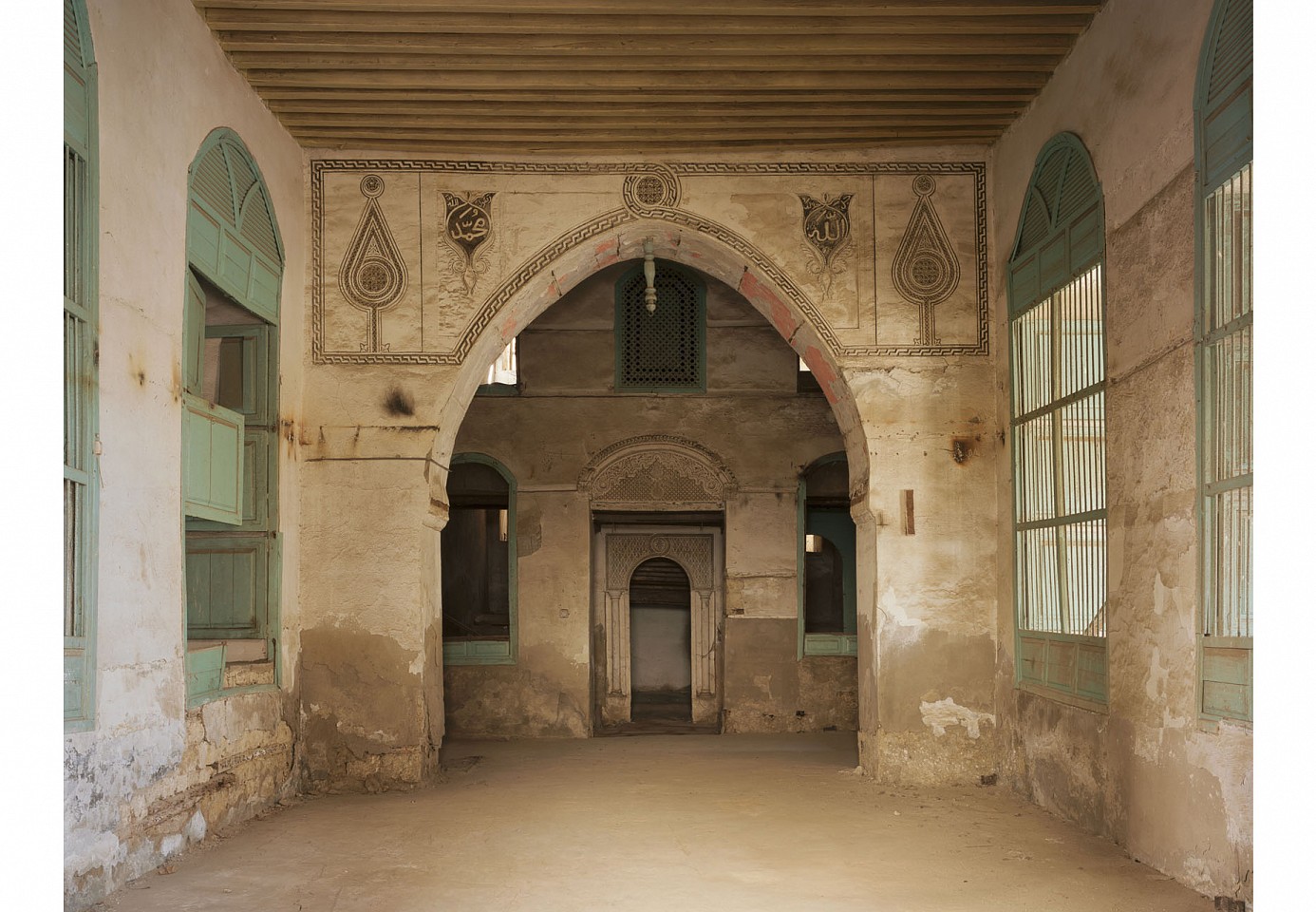 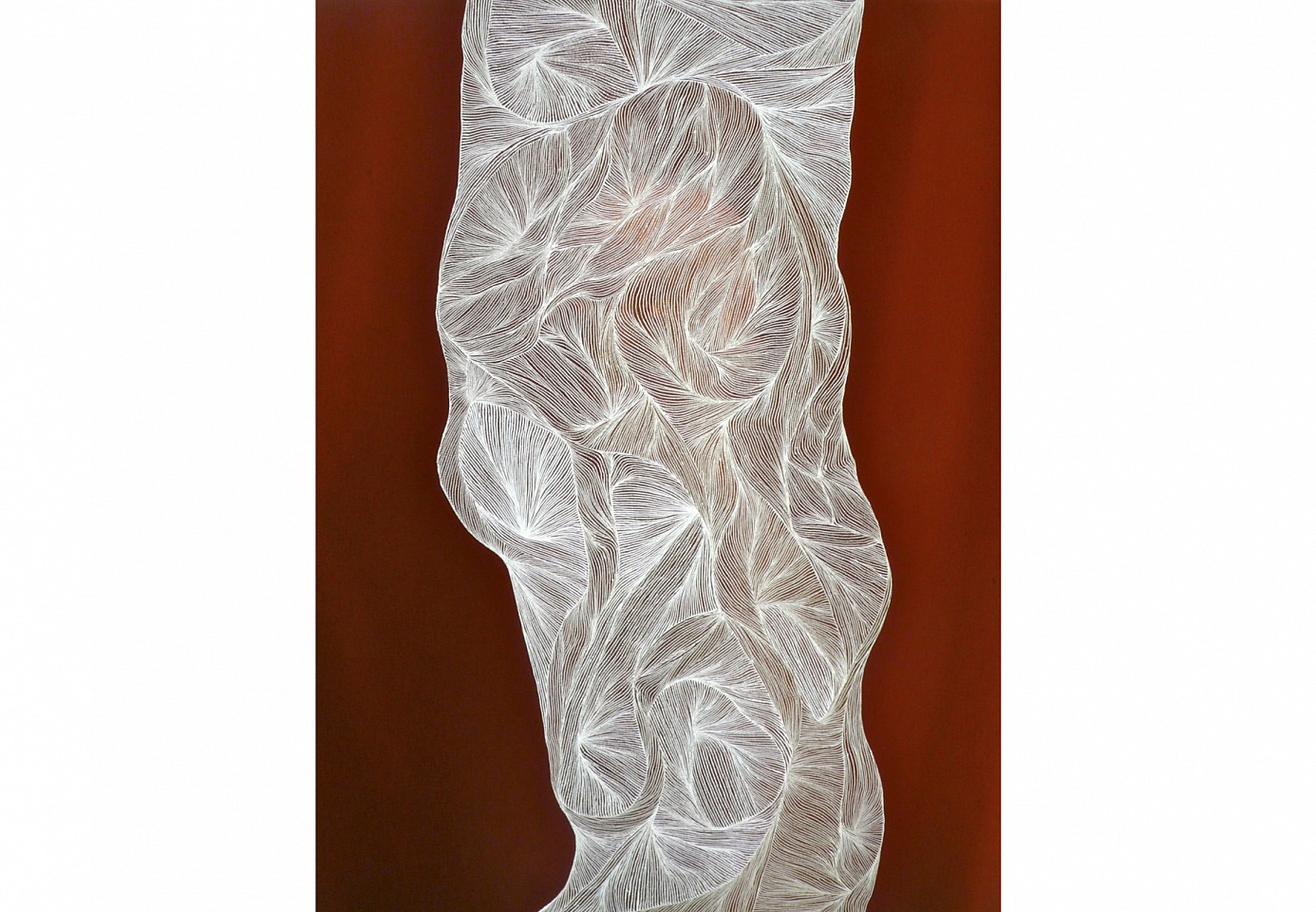 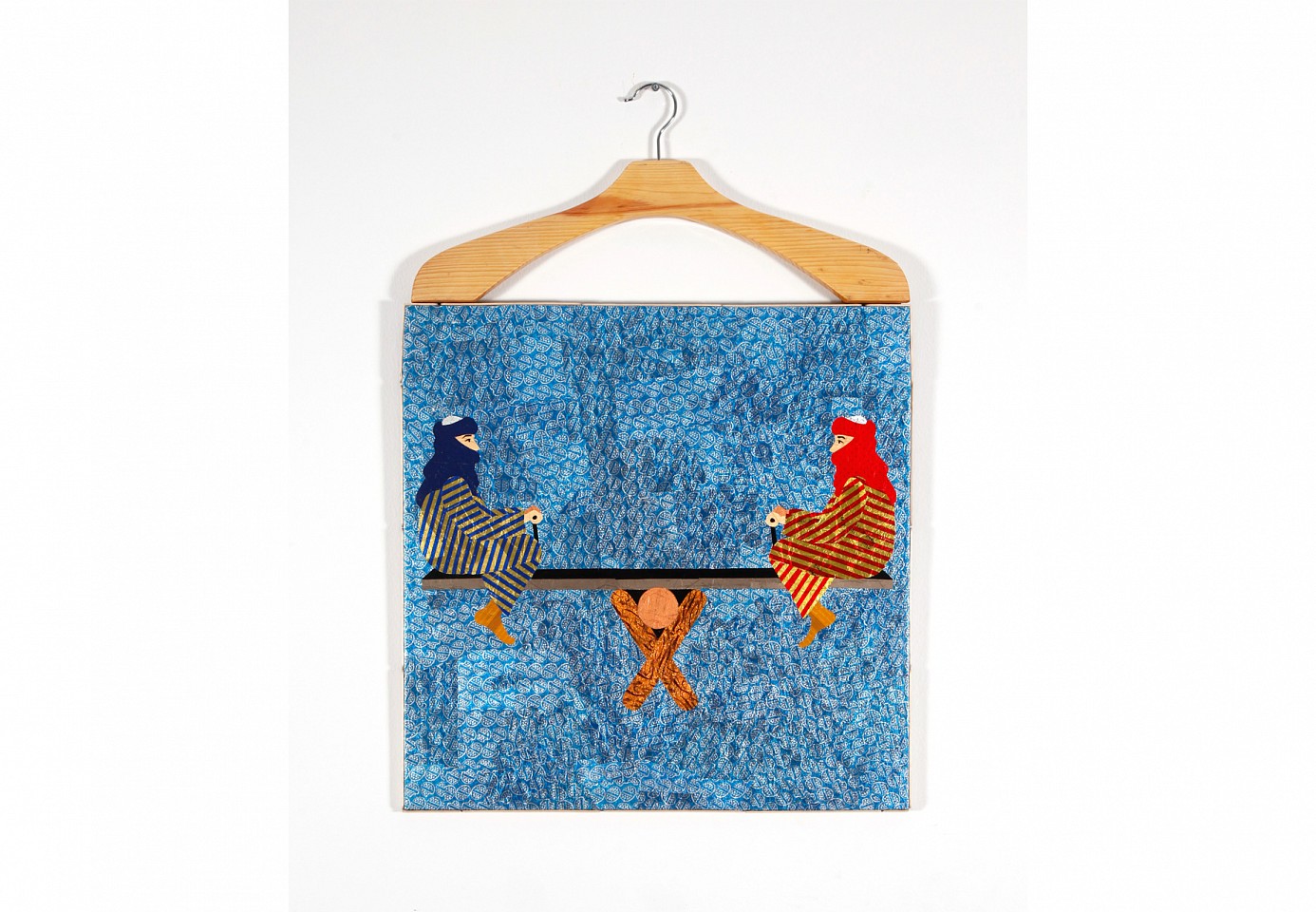 Indeed All Things We Created With Predestination, 2014

Natural ink and pen on paper

From The Series The Everlasting Now, Edition of 3 + 2 AP

Indeed All Things We Created With Predestination, 2014

Natural ink and pen on paper

From The Series The Everlasting Now, Edition of 3 + 2 AP

These works are still, and will most likely remain, incomplete. Inspired by traditional Mashrabiya, tooled wooden screens traditionally separating the private and public spaces in Islamic Architecture, they are about many things. They revel in the ‘in between’; photography and drawing, public and private space, Representation and abstraction, obscuring and revealing. Weather they transcend or trespass, these are about the lines we draw, and the spaces in between.

The historical phenomenon of the Moallaqat is a much-debated subject. With very little evidence save oral traditions passed down from generation to generation to prove their existence, there are many scholars who claim that they are merely legend.

Previously translated as ‘The Suspended Odes’, ‘The Hanging Poems’ or ‘The Golden Odes’, the Moallaqat were originally a compilation of seven poems, the jewels in the crown of the most renowned poets of pre-Islamic Arabia; Imru’ Al-Qais; Antara Ibn Shaddad; Amr Ibn Kulthum; Labid; Zuhayr bin abi Salma; Tarafa and Harith bin Hilliza. Legend has it that they were written in gold on the finest Coptic linen and hung on curtains covering the Ka’ba, an event that is commonly thought to have influenced their title of ‘Moallaqat’, a term that denotes suspension. However, it has also been suggested that the title was bestowed, not because they were suspended on the Ka’ba, but because their content, once read, would become suspended in your mind. Another theory is that the term ‘Moallaqat’ originates from ‘ilq’, meaning ‘precious thing’, suggesting that it was something to ‘hang’ on to. (Reynold A. Nicholson, A Literary History of the Arabs).

The structures of these poems were made-up by the classical qasida pattern, which preludes with the Nasib, where the poet would call to mind the memory of a former love; followed by the main body, which was composed of a succession of movements and descriptions of the poet’s horse or camel, as well as various aspects of Bedouin life and warfare; and finally the Madih, or main body, where the poet pays tribute to himself, his tribe, or his patron. It was once said that there were three causes for congratulations amongst a tribe; “the birth of a boy, the foaling of a mare, and the emergence of a poet”. (Ibn Rashiq of Kairouan, d.1064). The poet played a recognized and important role in society; he was defender of the honour of the tribe and protector of their good reputation. Their tales are not merely of love and escapades, but of the environment and social fabric of the time.

Fact or fable, not only is the influence of the Moallaqat on our understanding of the history and culture of Arabia indisputable, but it remains of the utmost importance to how we view and understand ourselves today. Therefore, although it might seem incongruous to have chosen such a historical subject for such a contemporary exhibition, the title of “Moallaqat” was favoured for all that they represent; Clauston describes the Arabian poets as “Impulsive children of the desert, whose passions had free scope for good and evil…capable of the most intense affection and the most bitter hatred, whose strong feelings found vent in flowing verse” (W.A. Clauston, Arabian Poetry). The poems can be described as a window unto our souls, as they manifest the full spectrum of human emotion without reserve.

Furthermore, poetry was no luxury for the cultured few. Although they were men of high poetical genius, the poets themselves could scarcely read or write. Poetry was a gift of nature and a unifying principle of the Arabs. The legend of the Moallaqat states that they were displayed in the most revered and widely visited spiritual location on Earth, the Ka’ba in Mecca, indicating that it was a gift that was meant for one and all to enjoy.

Therefore, the Moallaqat are testament that poetry was an art for the masses, at a time when the richness of the Arabic language was a commodity mastered and appreciated by all, even amongst the illiterate. It is safe to say that in today’s world, the everyday language of Arabic has lost much of its depth, and the majority has not had the fortune to live life with an ear attuned to the beauty and complexity of verse. At a time when Arabia is in the media spotlight, and many preconceived notions about the region and the religion prevail, society looks to new heroes, new defenders that speak to the masses, and for the masses. Poetry was a weapon, used to defend, to attack, but also as a diplomatic tool. Thus, art has come to adopt the mantle of diplomacy, and acts as an ambassador of truth, bridging cross-cultural rifts of misunderstanding.

The works exhibited reveal each artist’s own unique perspective, process and practice. The result is a broad and rich spectrum of possible interpretations and associations to the Moallaqat, ranging from the acutely abstract, to the discerningly literal. Nasser Al-Salem is seized by the mystery of the number 7, which leads him on an existential odyssey, exploring the workings of the universe in his work An Adornment of Stars. Dania Al-Saleh’s geometric narrative Ahwak (I adore you) uncovers her wonder at the unreserved and unashamed nature of the poets’ declarations of love, immortalized in the Moallaqat, compared to the taboo that surrounds the concept of love in today’s society. As the Moallaqat poems were preserved orally and passed down from generation to generation until properly inscribed, Dr. Effat Fadaag’s work Bequests explores the phenomenon of the inheritance of knowledge, and the passing down of wisdom from generation to generation; a prominent feature in the history of Arab culture as a result of its oral tradition as well as the tool used for preserving the history itself through the method of isnad. Similarly, Manal Al-Dowayan’s The Tree of Guardians delves into the topic of generations, an intrinsic aspect of Arab identity that considers one’s sense of self as strong as the depth of their patrilineal line. Aldowayan re-examines the concept of legacy.