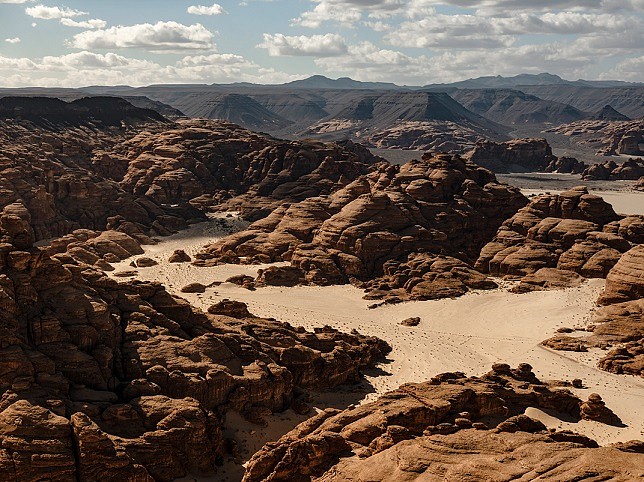 Desert X AlUla has revealed the artist list for its second edition, set to open in Saudi Arabia this February. Site-specific works by international and local artists will again be scattered across the ancient desert landscape—a sprawl of sandstone mountains and valleys—in the northwest of the kingdom.

The biennial, which also holds an edition in California’s Coachella Valley, held its first exhibition there in 2020. Desert X’s AlUla exhibition is organized in collaboration with the Royal Commission for AlUla, which is led by Crown Prince Mohammad bin Salman.

This iteration will be situated in a new complex and is organized by the founding Desert X director Neville Wakefield, co-artistic director Raneem Farsi, and curatorial advisor Reem Fadda. Newly commissioned works by 15 artists will explore the theme of Sarab, meaning “mirage” in Arabic. Drawing on the landscape’s history, the works will examine illusions and myths, as well as the dichotomy between the natural and the manmade.

“The desert concepts of mirage and oasis have long been tied to ideas of survival, perseverance, desire and wealth,” Fadda said in a statement. “The oasis pertains to ideas of finding prosperity or heaven, while the mirage is a universal symbol of the mysteries of imagination and reality. Under the theme of ‘Sarab’, the artists presented in the exhibition—all of whom have spent time in the AlUla region—have developed ambitious and strikingly innovative, site-specific responses, all of which address profound issues, that emerge from the local context but also resonate with audiences the world-over.”

The commissions include interactive sculptures by Zeinab AlHashemi which arrange discarded camel hides into an abstract architectural structures that together resemble an undulating mountain range; Abdullah AlOthman’s stainless steel plinths that interact with the light, radiating and obscuring the space like far-off mirage; Monika Sosnowska’s sculptural exploration of memory using heritage rails from the Hejaz railway, which once ran from Damascus to Medina; a recreation of an orchard of olive trees, which represents those displaced from their indigenous land, by Khalil Rabah; and Ayman Zedani’s soundscape installation in a rocky cavern comprising sculptural wires and an audio projection of human voices, music, and footsteps.

“Having worked for many years on the development and representation of the Saudi art scene, I can see that today Saudi artists are getting more attention and opportunities than ever before, both locally and internationally,” Farsi said in a statement. “Desert X AlUla plays a very important part in a vast wave of art and culture initiatives that is shaping the ecosystem for creativity in Saudi Arabia.”

The AlUla project is part of a vast cultural masterplan for the region that includes art events such as the Diriyah Biennale, which is currently staging its first edition. The investment aims to create a more progressive image of the country in line with the government’s “Vision 2030” plan. AlUla includes the kingdom’s first UNESCO World Heritage site. Government officials estimate that, by 2035, the region will welcome 2 million visitors annually, around 40 percent will be international tourists.

The artist list for the second edition of Desert X AlUla follows below.

The exhibiting artists are: