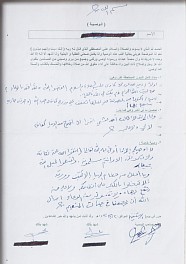 Born in 1982 in Abha, a region to the south of Saudi Arabia, Abdelkarim Qassem holds a Bachelor's degree in Psychology from King Abdulaziz University, Jeddah. He belongs to a group of young artists whose work has proven instrumental to developments within Saudi Arabia's art scene, notably through the activities of arts collective Shata established in 2004, the first of its kind in the country.

In his latest work, Qassem’s work predominantly deals with the effect of warfare and trauma on the human state. Through miscellaneous found objects, he asserts the significance of these object to the human, and observes them as identifiers of underlying human emotions, cultural issues and more.

He has exhibited in numerous group exhibitions including, Rhizoma, an Edge of Arabia exhibition at the Venice Biennale [2013], Mostly Visible in Jeddah [2013]. Qassem's debut solo show, Soft White, took place in Jeddah [2005]