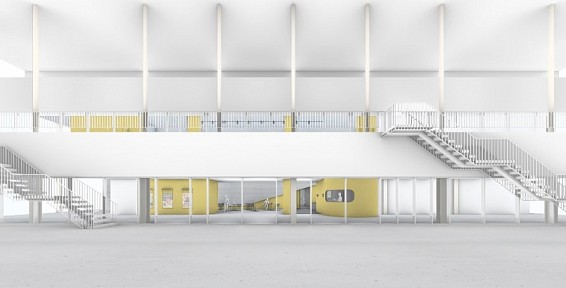 PSST... HERE'S A SNEAK PEEK INTO WHAT SAUDI'S FIRST INDIE CINEMA WILL LOOK LIKE

Looking at Saudi Arabia’s film scene today, it’s hard to imagine that it was just a year ago that the kingdom lifted its 30-year-long cinema ban. Cinemas have cropped up on every block, with a total of 45 planned to be constructed by 2020, and Haifaa Al Mansour’s Oscar-nominated film ‘The Perfect Candidate’ was shot entirely in Saudi.

Adding to the burgeoning film scene is the fact that the kingdom is about to open the doors to its first independent cinema.

Following Art Jameel’s international design competition, winning Jeddah-based design studio, Bricklab, has been entrusted with the construction of the arthouse theatre dubbed Hayy: Cinema. The establishment will be a central component of Hayy:Creative Hub, a 17,000-square-metre space for the arts, which is due to open in Jeddah next year. 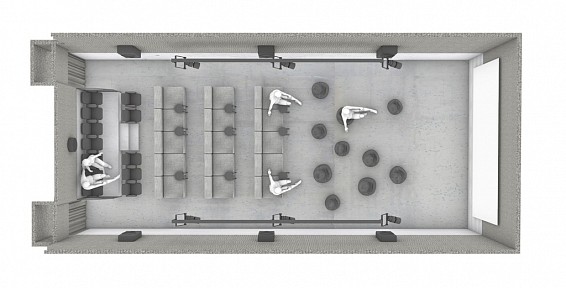 'Expanding the role of what a cinema can be': what Saudi's first indie movie theatre will look like

Jeddah design studio Bricklab has won an Art Jameel international design competition for its proposal for Hayy:Cinema, a central component of Hayy:Creative Hub, the 17,000-square-metre space for the arts, which is due to open in Jeddah, Saudi Arabia next year.

The winning design features a 200-seat auditorium, as well as an additional community screening room, an audiovisual library, archive viewing rooms and an educational space. The Art Jameel website stated that the design “expanded the role of what a cinema can be”. 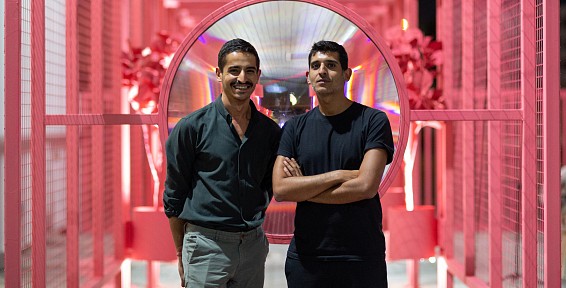 JEDDAH: The Jeddah-based design studio Bricklab — founded in 2015 by brothers Abdulrahman and Turki Gazzaz — has won the Art Jameel International Design Award for its proposed design of Hayy:Cinema.

The cinema will be part of Hayy:Creative Hub — which is set to open in Jeddah next year — and is billed as “the first bespoke home of Saudi and international independent film in the Kingdom.” 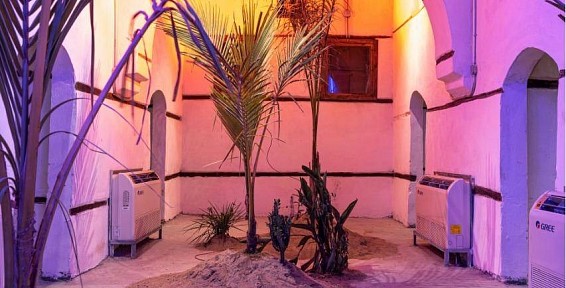 Also located in the piazza of Rubbat Al-Khunji House, an outdoor exhibition and visual study called The City in my Playground, a collaborative work between Zahra Bundakji and artist Mohammed Al Faraj, where he and children of the neighborhood take ownership of the streets through activities, explorations, and guided workshops.

As part of SAC’s art and culture events, Sharbatli House is also hosting an aleatory created by Nasser Alshemimry. The term aleatory refers to the random interactions of different sound sources to generate a whole one large sound that is more than the sum of its parts. Legendary musician John Cage pioneered the use of aleatory in his compositions. Aleatory allows the composition to be ever evolving and influenced by the environment, surroundings, and observers. Additionally, visitors can enjoy a Book Fair Co-space at the Historic Jeddah Season. The Book Fair is designed as a co-space of knowledge at the Sharbatli House Annex, which has been repurposed to offer a space that brings people together by presenting a design bookshop, reading space and lush gathering spot. It is a quiet modest' space, serving as a canvas for community engagement and debate. 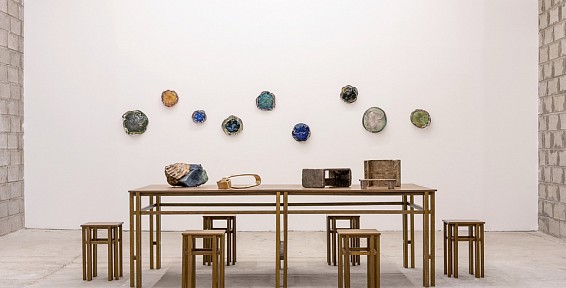 A reflection on heritage, the WEHE Collective Design exhibition in Jeddah’s Athr Gallery highlights the duality of the past and present

Inspired by sociological and anthropological observations of the urban oasis of Siwa in Egypt, the exhibition explores the relationship between primordiality and the geographical context of the Middle Eastern desert. “I am always fascinated by how local Berber populations managed to adapt tradition with modern lifestyle,” says curator Bellavance-Lecompte. The inspiration behind the exhibition was, as Bellavance-Lecompte says,  “to redefine an identity in relation with the region and somehow with materials and techniques that are indigenous. At the same time, I wanted to push the boundaries of their use so we’re able to revisit our perception of these objects.” 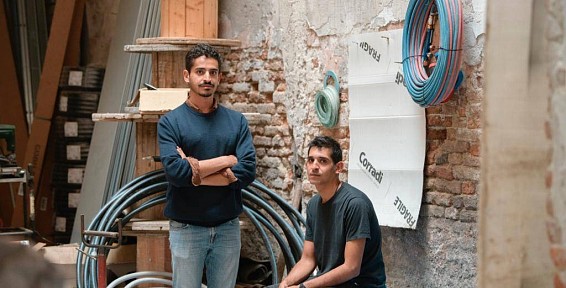 Abdulrahman pointed out that this year’s Summer edition of 21,39 takes as its central theme questions about the development, restoration, and revival efforts initiated and supported by Crown Prince Muhammad Bin Salman, in Al-Balad and its potential to establish a fresh perspective on our understanding of the values of civic life. 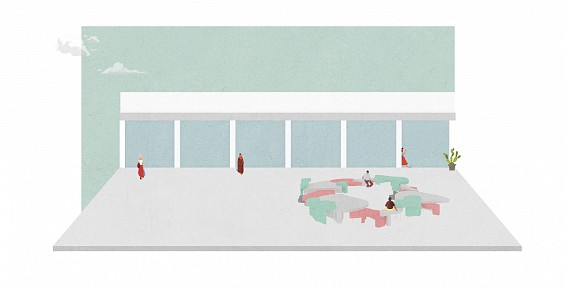 Visual arts
For 2019 Shubbak has commissioned a number of mobile installations for different locations across London. Aicha El Beloui is a Casablanca-based illustrator, graphic designer, and creative director who regularly works with communities to discover a neighbourhood and to filter her observations into maps and illustrations. The history and psychogeography of Moroccan immigration in London will be the focus of her work for Shubbak; drawing from the material gathered in North Kensington and the British Library’s archives, El Beloui will create one of her distinctive maps, which will be available in paper formats, digitally and as an installation, travelling to different sites across the city. In partnership with the Bagri Foundation.

Bricklab, the designers of the first Saudi pavilion at Venice Architecture Biennale create a new pop-up sculpture especially for Shubbak. 22 brightly coloured units equalling in number the 22 states of the Arab League are arranged in different constellations to offer new viewpoints of geographies, nations and the power to imagine other realities. No unit can stand on its own, but has to be grafted onto others. Geographical Child’s Play conjures up poignant and surprising alignments and dependencies. Established in Jeddah in 2015 Bricklab quickly established itself as one of the most dynamic current design practices in Saudi Arabia.

Shubbak is the UK’s premier festival of contemporary Arab culture, presenting outstanding Arab artists to audiences in London and across England. Shubbak’s programme includes UK premieres and new commissions from over 150 artists based in the Arab region, in Europe and in the UK, with both cutting-edge and celebrated names, through a mix of visual arts, film, music, theatre, dance, literature and debates. Led by Eckhard Thiemann, artistic director, and Daniel Gorman, executive director, Shubbak 2019 is the 5th edition of this biennial festival. Shubbak 2019 principal partners are Arts Council England, A. M. Qattan Foundation, Bagri Foundation and British Council. Shubbak is a registered charity number 1150374. 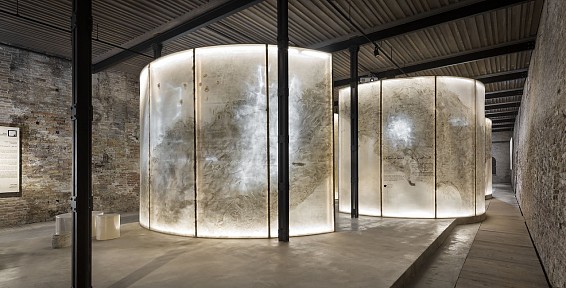 Spaces in Between, Saudi Arabia at the 2018 Biennale for the first time

The Saudi pavilion, commissioned by the Misk Art Institute makes its debut as one of the 65 national pavilions of the 2018 Architecture Biennale in the Sale d'Armi spaces of the Arsenale, with a scene-stealing installation created by architects Abdulrahman Gazzaz and Turki Gazzaz from the Bricklab architecture studio in Jeddah. They have crafted curved elements made from a translucent material, resin - a by-product of the petrochemical industry - mixed with desert sand, which channels the country's future beyond oil, marking the various sections of the exhibition and accompanying visitors.

Spaces in Between, curated by the female curators Jawaher Al-Sudairy, directors of the Nahda Center for Research and senior program manager at the Harvard Kennedy School, and Dr. Sumayah Al-Solaiman, dean of the College of Design at Imam Abdulrahman bin Faisal University describes the current evolution of the country that is entering a new era of change, powered by Prince Mohammed bin Salman's Vision 2030 project.

Saudi Arabia is participating in the Venice architecture biennale for the first time, in a pavilion commissioned by the Misk Art Institute, the foundation set up by Crown Prince Moham­med bin Salman and run by Ahmed Mater.

The pavilion is made up of six spaces designed by the young Jeddah-based architects Abdulrahman and Turki Gazzaz, brothers who collaborate as the studio Bricklab. They present “an introduction to the major urban centres in Saudi Arabia and how the oil boom has affected their growth”, says Abdulrahman Gazzaz, the elder of the two. “Jeddah, as the port city, with its long history as the gateway to the holy cities; Makkah, as the religious capital; Riyadh, as the government capital; and Damman, as the centre of the oil industry.”

Right now, he continues, “a lot of changes are happening. We have this space in between what it was and what it is and what is becoming. It’s a fascinating point in the history of Saudi Arabia.”

'In Saudi, there is a stronger sense of community'

The title for the pavilion, Spaces in Between, looks not only at changes to the kingdom, but also at the fact that Saudi cities are a patchwork of spaces. Because urbanisation in Saudi Arabia was spurred on by the oil boom, its cities are characterised by sprawl, built with cars in mind rather than the slow pace of foot traffic.

“The combination of sand and resin reflects two primordial conditions of Saudi Arabia as a nation: its oil economy and its desert landscape,” Turki explains. “Even though there’s a lot of diversity around the kingdom in terms of natural environments and climates, the desert comes to the foreground when one recalls the Gulf or Saudi Arabia in particular.” 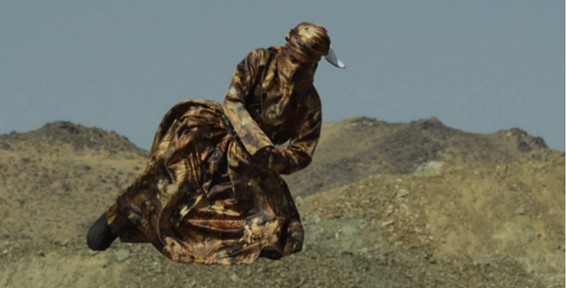 21,39 is back for its fifth edition under the theme 'Refusing To Be Still' and will show across multiple venues in Jeddah from 7 February to 5 May.

Featuring over 30 Saudi and international artists, this year’s edition of 21,39 takes a fresh look at the growing Saudi contemporary art landscape. Taking place across three venues, the main group exhibition Refusing To Be Still will be held at the Gold Moor Mall, Rubat Al Khunji and an empty PepsiCo factory. A second group exhibition is hosted at ATHR gallery entitled The Clocks Are Striking Thirteen, while a third exhibition will showcase works by Ahmed Mater in Drum Roll, Please at King Abdullah Economic City. A diverse offering of family activities, book launches and trips are also scheduled.