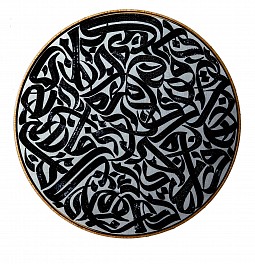 Farah K. Behbehani is a Kuwaiti artist and designer. She received her M.A. in Communication Design (Distinction) from Central Saint Martin’s College of Art and Design, London, in June 2007. Farah is a published author of ‘The Conference of the Birds’ (Thames and Hudson, London, 2009), a book based on Farid Ud-Din Attar’s 12th century Sufi allegorical poem.  Illustrated with Jali Diwani calligraphy, the book is designed with a system to enable readers to understand the meaning and fluency of the calligraphic illustrations, giving greater insight into the intricacies of Arabic script.

Farah has worked on several architectural projects in her native Kuwait. From 2011 until 2013, she collaborated with the New York-based architectural firm Skidmore, Owings and Merrill (SOM) to design “veils” that would serve as shading structures for Kuwait University’s seven Administration buildings. Entitled ‘Shades of Knowledge’, Farah’s module calligraphic designs were transformed into evolving patterns that would envelope each of the seven buildings. Using Qur’anic verses, poetry and prose, the structures create an ephemeral play of light and shadow through a maze of letters that draw upon references from Islamic literature.

Farah has also participated in a number of exhibitions internationally, including: ‘Arab Visual Art’, European Parliament, Brussels (2008); ‘Arabesque: Arts of the Arab World Festival’, Kennedy Center, Washington D.C. (2009); ‘The Future of Tradition - The Tradition of Future’, Haus Der Kunst, Munich (2010); Sharjah Biennial of Calligraphy, Sharjah Calligraphy Museum (2012); and ‘Pen to Paper’ Athr Gallery, Jeddah (2013). One of her latest body of work looks at the playful possibilities that letters can create, weaving together different narratives through intricate forms of threading and beading. Entitled ‘Stages of Ascent’, this work was exhibited in her first solo show at the Contemporary Art Platform, Kuwait, in January 2014.