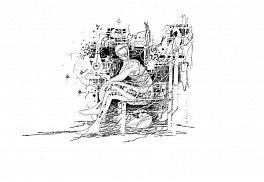 “I find that lines I create have an inherit duty to continuously move and flow without interruptions; to form objects and figures, and direct the eye to visually realize the entirety of the work” - MA

Mohammed Abdel Rassoul is a Sudanese artist whose drawings of lines and threads form figures and objects enmeshed in poignant and quiet moments. These lines and ropes manipulate shadow and light, creating and contouring forms, their flexibility and fluidity direct the human eye, delivering a somber connectivity between line and object, object and viewer. This entanglement and ensnarement of object and lines delineates on often somber and melancholic themes presented in beautifully contemplative compositions.

Mohammed Abdel Rassoul was born in 1979 in the Kordofan region of Sudan. He lives and works in Khartoum where he also completed his undergraduate studies from the Sudan University of Fine Arts.

He has participated in many group exhibitions including a group exhibition at the Sudanese National Museum [2007]. The British Council, Khartoum [2008], Features and Visions, The French Cultural Center [2010] .Earth and Ever After, 21,39 Jeddah Arts, Jeddah, Saudi Arabia [2016], African Amicitiae, Thami Mnyele, Amsterdam [2017].

Mohammed has completed a residency program at the Thami Mnyele Foundation, Amsterdam [2010], and his work was acquired by the Sudanese Presidential Palace.