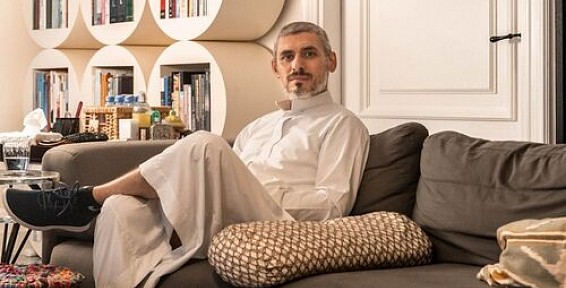 An Artful Abode In Jeddah

Located in the Rawda area of Jeddah is the home of Mohammed Hafiz, art collector and co-founder of Athr Gallery , a space set up in 2009 to support emerging and established artists from Saudi Arabia. A step inside reveals some of the Kingdom’s biggest names: Ahmed Mater, Abdulnasser Gharem, Larissa Sansour, Timo Nasseri and many, many more. There’s an inviting ambience that one feels immediately as they enter – it’s as if the artworks themselves greet guests. “It all started when I began collecting art,” says Mohammed.
“As a collector, the way I always bought the work, especially the ones that qualified to be hung in the house have a very special story and connection behind them,” says Mohammed. “Each work is connected to me in some way, representing a special moment of my life. I look at the art every day and they bring back the most wonderful memories. 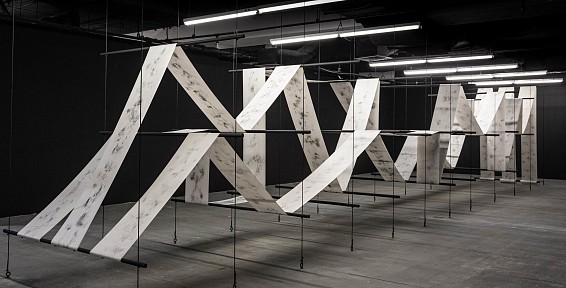 Beyond Words With Artist Muhannad Shono

Through the use of pigment and vibration, the artist studies what he deems “the crisis of the word.” In each work Muhannad grinds hardened charcoal words to dust and then employs vibrations from inaudible spectrums of sound to result in the new “words” – undefined black pigment forms – on paper.
Muhannad’s depictions on paper are the result of the artist’s inquiry into the shifting states of storytelling that occupy contemporary society. He believes that human beings have a tendency to place faith in stories and myths, drawing us to the construction of our present, past and future worlds. Such exploration stems from the artist’s “imagined state of being.” It’s a state that is devoid of time and place and that simply exists. In many ways, it also frees the artist from his own sense of displacement. 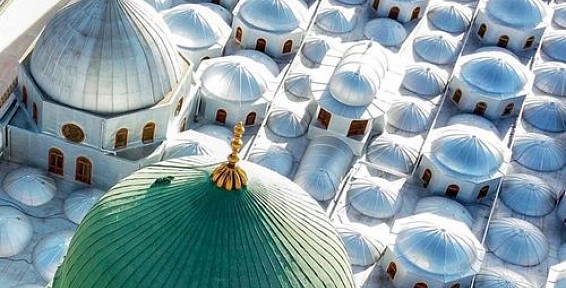 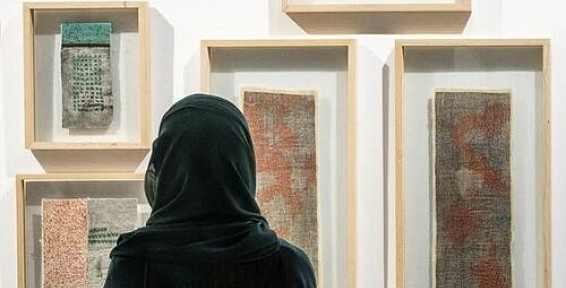 In Conversation With Curators, Hamza Serafi And Munira Al Sayegh, On Why Now Is The Time To Invest In Saudi Arabia's Art Scene

“The role of collectors is essential to art movements and culture, both in Saudi Arabia and internationally,” says Hamza Serafi, a self-taught artist and co-founder of Jeddah’s Athr Gallery , one of the country’s leading cultural and commercial art spaces. “Collectors play a massive role in the world of contemporary art.”
The Kingdom’s art scene is undeniably flourishing with the support from the government, at an unprecedented rate. “We are experiencing and living through one of the most current movements which covers the whole spectrum.” Like neighbouring Gulf countries, Saudi Arabia is investing heavily in the arts and culture sector, building new museums and hosting exhibitions and events to encourage a whole new generation of art lovers. 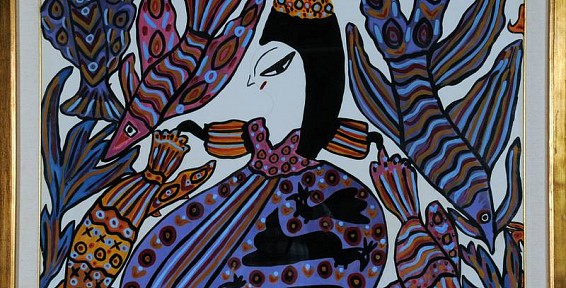 Artworks from the private collections of Sheikh Mohammed bin Rashid, Vice President and Ruler of Dubai, and prominent collectors in the UAE will go on view this year as part of the Dubai Collection initiative.
Sheikh Mohammed's collection includes a work by Baya, as well as works by Emirati artist Abdul Qader Al Rais and Syrian artist Fateh Moudarres. Sheikha Latifa's collection, meanwhile, has works by Shaikha Al Mazrou, who is from the UAE, and Yagiz Ozgen from Turkey.
In addition, a total of 19 works from the corporate collection of ARM Holding have been added, with listed creations by Mohamed Ahmed Ibrahim, Lamya Gargash, Moath Alofi and Rathin Barman. 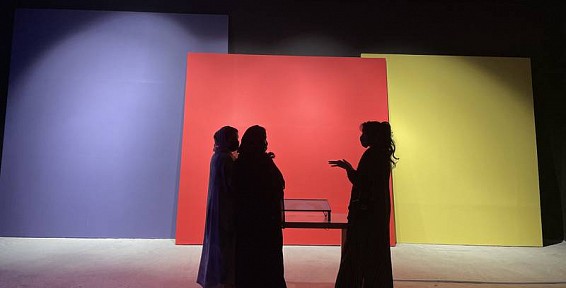 The Saudi Art Council launched on Wednesday launched its eighth iteration of the 21,39 Jeddah Arts exhibition, titled The Secrets of Alidades. Curated by French academic Fabien Danesi, the event is showing the works of 35 artists and celebrates the theme of the universe by taking visitors on an interstellar journey. It had initially been set to open to the public in March, but was delayed owing to the pandemic.
Saudi artist and explorer Moath Alofi says his work is an extended message from the past to explore the beauty and treasures of the kingdom.
Basmah Felemban, also from Saudi Arabia, created a sonic getaway with an interactive video game installation titled The Jirri Tribe Stop (2021). It took her two years to develop the game centred on the main characters, which are catfish that try to maintain the sea's balance.
Moving away from his familiar calligraphy this year, Nasser Al Salem, from Jeddah, created his first sculpture, The First Space Shuttle, 2019-201 , inspired by nomads who used tents as their habitat, but borrowing from the SpaceX Crew Dragon capsule design. “This idea of mobility creates a link between nomadic Bedouins and astronauts in their use of space and their engagement with nature,” Al Salem says. 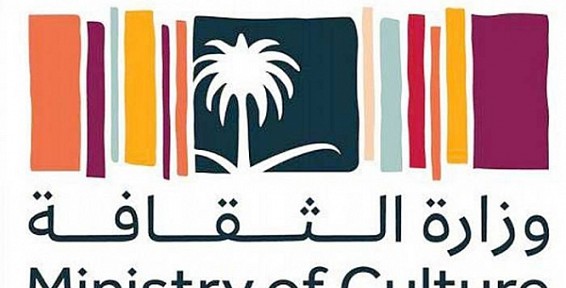 The Ministry of Culture organizes an exhibition showcasing the history of Arabic calligraphy under the title "Scripts and Calligraphy: A Timeless Journey," scheduled to be held from June 16 to Aug. 21, 2021 at the National Museum, Riyadh. The exhibition highlights the stages of the Arabic Script’s development since its very beginnings and the artistic relationship between calligraphy, contemporary art, and artificial intelligence through an exceptional journey of knowledge, featuring Saudi and international master calligraphers, contemporary artists, and designers. The sections and contents of the “Scripts and Calligraphy: A Timeless Journey” exhibition are divided into five stages, namely, the origins of the Arabic script, the development of calligraphy, master calligraphers, calligraphy and contemporary art as well as calligraphy and artificial intelligence.
This section features works by a number of Arab designers from different majors and nationalities, namely: Ebtissam AlGosaibi, Hussein Alazaat, Hamza Al Omari, Khalid Mezaina, Rasha Dakkak, Ranim Al Halaky, Xeina AlMalki, Farah Behbehani, Margherita Abi Hanna, Milia Maroun, Mohammed Khoja, May Aboulfaraj, Nasser Al-Salem, Nadine Kanso, and Noor Saab.
The exhibition is the first of its kind combining classic Arabic calligraphy with artificial intelligence. In this path, artist Michel Paysant presents a new version of his device entitled "Eye Calligraphy Studio — A Constellation of Letters", which is one of the devices capable of exploring the roots of calligraphy and its deep mechanisms. 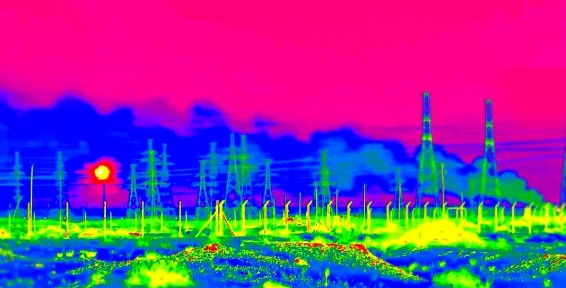 Is Art Basel’s Noah Horowitz a glutton for punishment? Ten years ago, he was the director of the first ever online art fair, called the VIP Art Fair, an ambitious initiative that crashed on launch and left scepticism of online art platforms in its wake. Now Horowitz, director of Art Basel Americas, finds himself also overseeing the fair group’s virtual showings — known as Online Viewing Rooms (OVRs) — which must seem uncannily familiar. This week sees the opening of OVR: Portals (June 16-19), the second of three standalone, online-only fairs planned for this year.
Highlights include works by the Los Angeles sculptor Karon Davis, who references the US government’s violent prosecution of the Black Panther Party members (shown by Jeffrey Deitch) and two Saudi Arabian artists — Ahaad Al Amoudi and Mohammad Al Faraj — who look at the future of their country from a millennial generation’s perspective 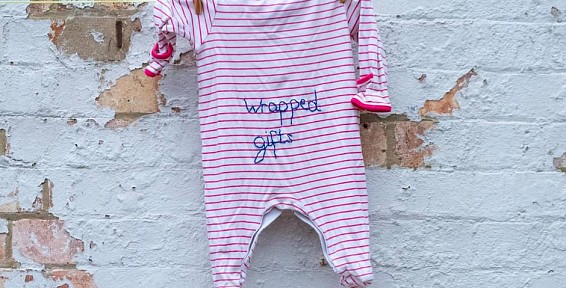 Gulf galleries at Cromwell Place bring the best of Abu Dhabi Art to London: a review

London's Cromwell Place launched last October during Frieze London. The idea of the South Kensington site is to offer members exhibition space as and when they need it, rather than galleries occupying a permanent home. So far, it has proven sensible for Arab galleries in particular. Many of their collectors live in London or Europe and, with the pandemic, a second outpost has been especially important.
Last week, a group of Gulf galleries installed exhibitions at the UK hub, painting a multi-generational portrait of regional art. Anchored by the curated show of Abu Dhabi Art, Cromwell Place is also hosting Lawrie Shabibi, Gallery Isabelle van den Eynde, Tabari Artspace and The Third Line from Dubai, and Hafez Gallery and Athr from Jeddah. 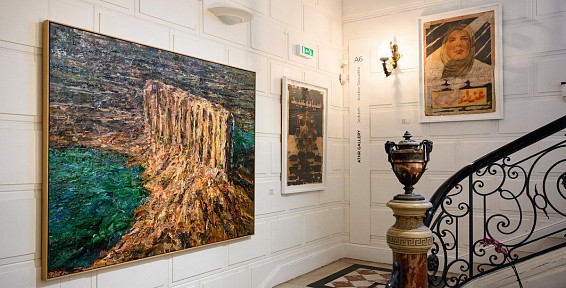 PARIS: When French-born Laure d’Hauteville launched the Beirut Art Fair in 2010 it was because she had fallen in love with Lebanon and Middle East art.
She was determined to contribute to the Mediterranean country that had become her second home.
Due to the catastrophic port explosion on Aug. 4 last year and the coronavirus disease (COVID-19) pandemic, the Beirut Art Fair was unable to take place.
Instead, d’Hauteville decided to use the French capital as a base for her new art fair, MENART , until Lebanon had managed to rebuild itself.
The fair took place from May 27 to 30 at Cornette de Saint Cyr on Paris’ upmarket Avenue Hoche and saw galleries positioned in different rooms across three floors of the private residence and auction house.
Marking the first international contemporary art fair dedicated to artists from the Middle East and North Africa (MENA) region after months of COVID-19 lockdowns, MENART opened the artistic season in Paris with a reception for more than 2,500 visitors, of which around 90 percent were French.

The popular French street artist has announced that he will be creating a new work at the Pyramids in Giza, Cairo, in October. "This is not a photomontage... but the art work in October might be a photo collage," reads the Instagram caption under an image of the artist posing nonchalantly (and inconceivably) on the back of a rearing horse.
"I've never been so excited to work on a project, this is an incredible site and I can't wait to come back to the Pyramids for the installation," JR tells The Art Newspaper . The artist is well known for his optical illusion works at famous sites. Most recently he has created a a trompe l’oeil in Paris that makes it look like the Eiffel Tower is teetering on the edge of a deep ravine . In 2016, he took on a different kind of pyramid—the one I.M. Pei designed structure outside the Musée du Louvre—which he made "disappear" .
The commission at the Pyramids is part of the exhibition Forever is Now (21 October 2021-7 November 2021) organised by Art D’Egypte, a company that aims to promote the contemporary Egyptian art scene with annual exhibitions at historic sites. In what is billed as the first event of its kind at the 4,500-year-old Unesco World Heritage Site, it will show works by Egyptian and international artists along a trail around the Giza plateau. 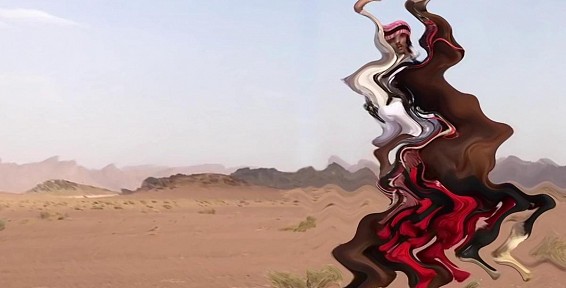 A new wave of NFT art from the Gulf is set to enter the virtual realm as more artists and gallerists from the region join in on what seems to be a crypto art gold-rush.
NFT art, or digital art that is tokenised on the blockchain and purchased using cryptocurrency, made headlines in March following a Christie’s auction where a digital artwork by artist Beeple sold for a staggering $69.4 million.
It wasn’t just the price tag that caught the world’s attention, but the technology through which the artwork was sold, too. NFTs, which stands for non-fungible tokens, are digital certificates that authenticate ownership of certain digital assets – videos, music, drawings, or even tweets, memes and articles – through blockchain technology.
In the region, a number of people, including Bandar Al-Wazzan, founder of Bawa digital art gallery in Kuwait, have seen an opportunity to be a pioneer for dealing crypto art.
Previous| 1 2 3 4 5 ... 28 |Next |View All