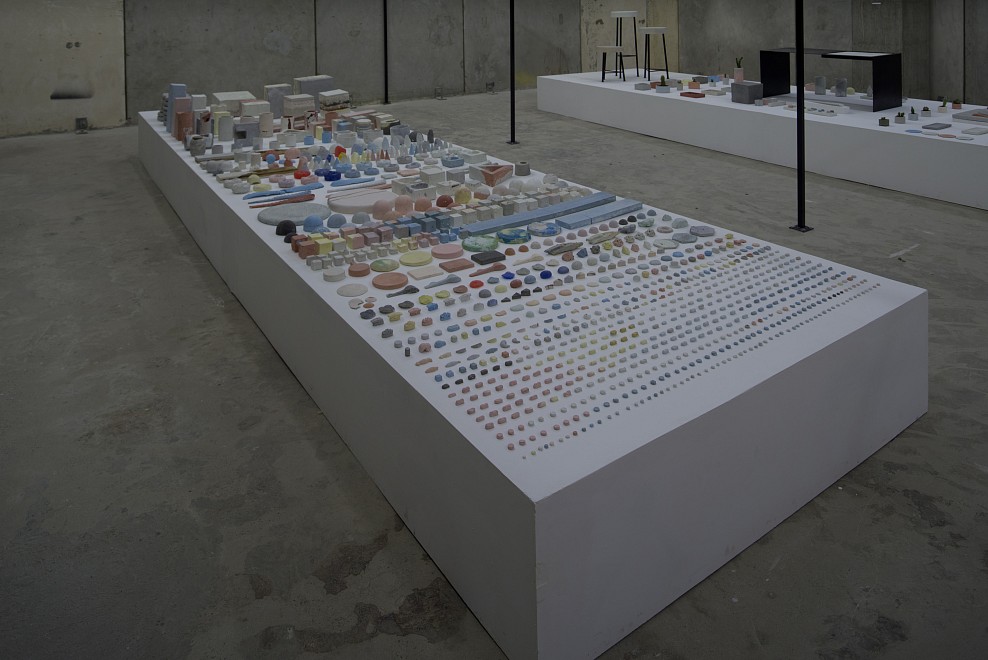 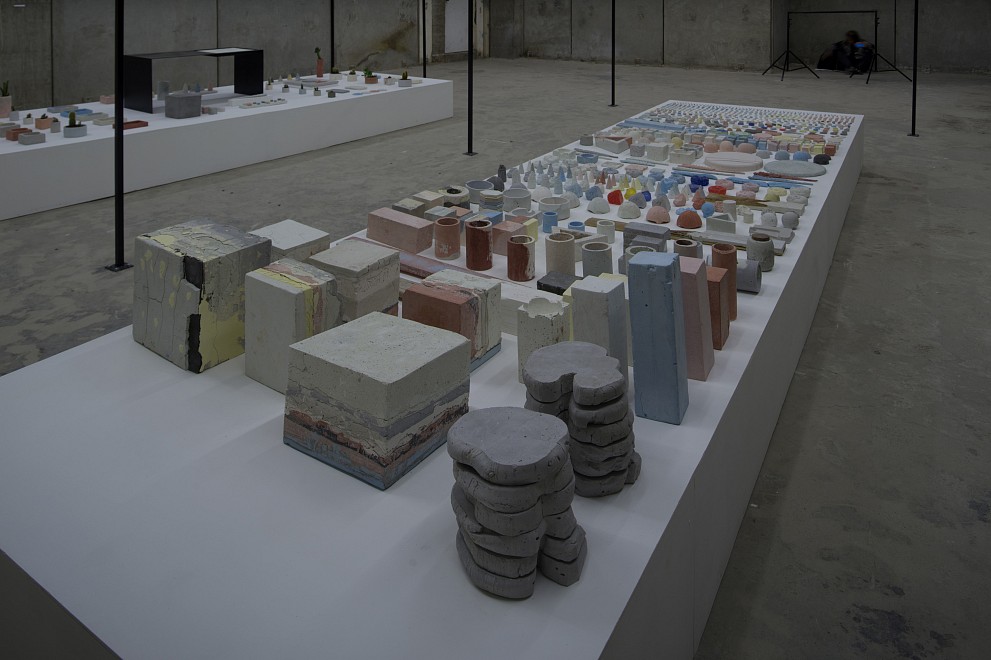 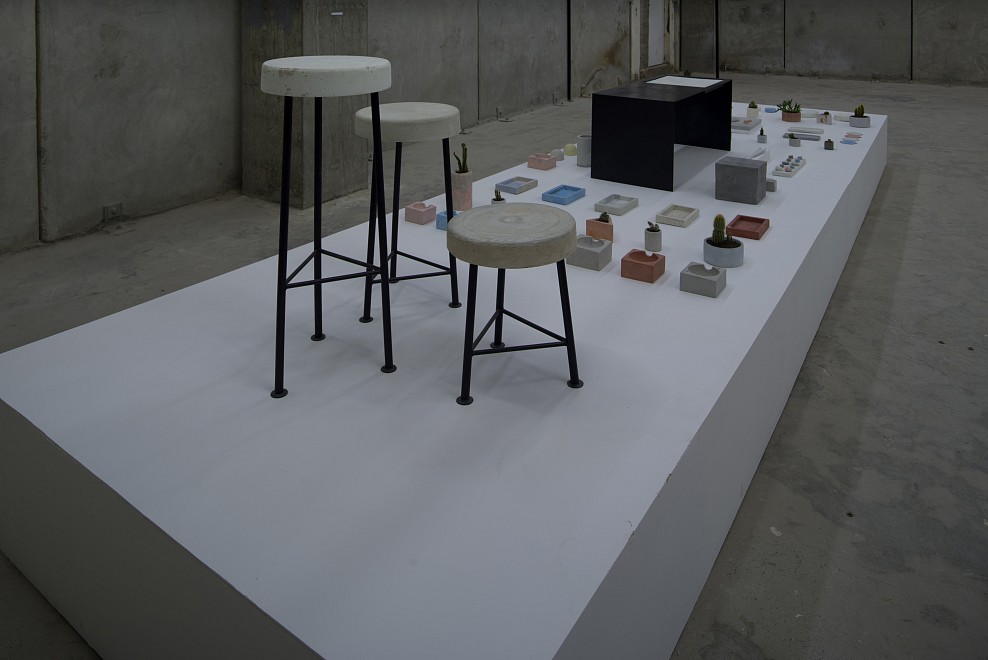 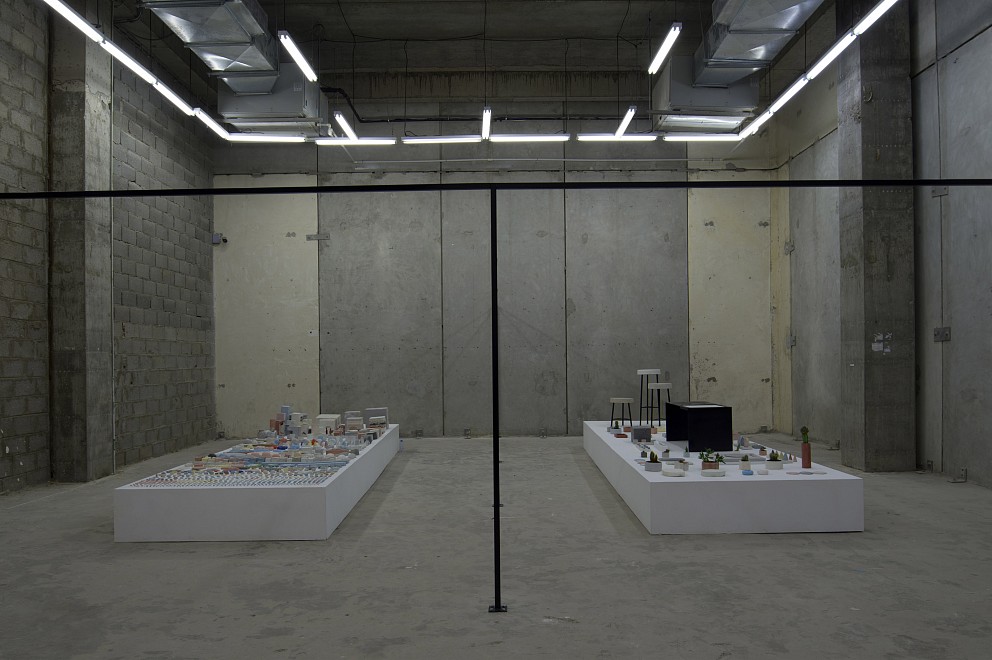 Abdulrahman Gazzaz’s new body of work presents a participatory social experiment based around contemporary value systems in the art world.

The single installation will sit across two spaces and exposes the multiplicity to Gazzaz’s identity- be it designer, architect or artist.

Gazzaz offers his audience authority over that decision where realms cross into one another, yet can also stand independently as separate facets of himself.

Nominal everyday objects become the artist’s subject, these include everything and anything from toys, rocks, plants, to fragments of wood. 1,101 of these items are meticulously cast in concrete and resin.

Gazzaz’s installation is deeply rooted in critical theory; Walter Benjamin’s Works of Art in the Age of Mechanical Reproduction, in particular, is challenged and unpicked within a contemporary setting. Benjamin explores the notion of authenticity in art, noting “even the most perfect reproduction of a work of art is lacking in one element: Its presence in time and space, its unique existence at the place where it happens to be.”

He identifies that anything independent of an original artwork is but a mere copy and the action of mechanical reproduction, be it printing press, engraving, lithography, and even casting, diminishing the original artwork as it changes the original context of authentic versus copy. He further elaborates on the unique aesthetic authority of an artwork encapsulated by the artist’s aura, which is not present in the mechanically-produced copy.

Gazzaz challenges this theory by reproducing each item identically using a mould, which theoretically would be classified as ‘mechanical’, albeit being done by hand, whereby the aura remains distilled in each piece.
The plinths bearing the nominal artworks, of which there are around 980 items, are unique items, irreproducible and unrefined in neither colour nor texture.

On the other hand, the plinths bearing the copied products mimic a system of mass production, where every detail is predetermined and every finish immaculately refined.

Disparities also lie in the choice of items, whereby the nominal artworks hold sentimental value through the stories and contained histories they inhabit.

Comparatively, the nominal products are casts from more functional objects that can easily be reproduced. By controversially creating a hand made ‘mechanical’ reproduction, Gazzaz blurs the lines of his process and Benjamin’s theory, to further present his audience with the philosophical perplexity of art versus product.

Gazzaz will mould each item as part of a set of two and display them under the title of either artwork or product, or vice versa. Nevertheless, this body of work will be presented as a single installation under the umbrella of a greater whole. Each item will adhere to its respective title, guided by broader social understandings and expectations. These include discrepancies in pricing, order, appellation, finish, edition and manipulation. What Gazzaz is really trying to achieve is a profound understanding as to how an audience relates, reacts and values art over product. Is it justifiable to inflate the price of an identical object under the heightened impression of it being an artwork, rather than the product of a mould? Who sets these value systems and how responsible are they in shaping the art world and its evolution through time and region? This installation is reliant on the participation of its audience, whose reflection and purchase power reflects a microcosm of a broader societal value system.