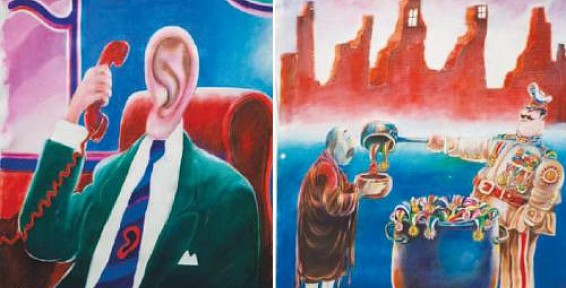 Farzat’s sharp pen criticizes immoral acts that are universally appealing, such as abuse of power, tyranny, injustice, hypocrisy, and inequality. It is because of these messages that transcend boundaries that his satirical cartoons and caricatures have become known and appreciated all over the world, granting the artist important awards like the Prince Claus Awards in 2003, the Sakharov Price in 2011, and the Index Arts Award in 2012. Farzat was also voted as one of Time Magazine’s 100 most influential people in the world in 2012.

Renowned and celebrated Syrian cartoonist, Ali Ferzat, will be exhibiting a retrospective of his work in an exhibition titled Echoes at Athr Gallery.

Among the 38 selected pieces to be exhibited is a 100 X 70 cm caricature of a towering authoritarian figure wearing an opulent military costume, spoon-feeding his subject from a large cast-iron pot that is overflowing with medals. This was exhibited in 1989 at the Institut du Monde Arabe in Paris. This exhibition at Institut Du Monde was not only crucial in propelling Ali into the international arena, but was also a turning point in Ali’s life. He would witness the backlash of this exhibition from different Arab states: consequences would include the ban of his work in Arab state-run media.

The other selected works vary from caricatures he’s created in the 80s to his most recent caricatures: from small black and white caricatures to large acrylic on canvas pieces. The artwork will be placed on white walls with a single light bulb directly hung in front of each work. The gallery’s space will create a cavernous atmosphere allowing each caricature to be examined as a stand-alone artwork. This deliberate attempt to allow each work its own resonance is inline with how Ali’s work is most described – a visual voice. He lends voice to characters that are more general types than recognizable individuals. This allows his work to be independent from any particular location; ultimately universalizing the issues he addresses. The strength of his caricatures is that they transcend geographic boundaries and target the human: abuse of power, tyranny, injustice, hypocrisy, and inequality are among the immoral acts that, unfortunately, are widely practiced around the world. His intervention is an attempt to awaken the universal conscious with poignant irony and sarcasm.

In spite of the fact that none of the cartoons contained portraits of actually existing leaders, they very often caused trouble

“ Wherever I go in the Arab world, caricatures of Syrian best-known political cartoonist Ali Farazat appear in various newspapers. There is a reason behind this: his meticulous drawings, mostly without captions, make a lot of noise.”   -- French cartoonist Plantu

Ali Ferzat was voted as one of Time Magazine's 100 most influential people in the world in 2012 and has won various human rights awards, including the 2011 Sakharov Prize for “Voices for Democracy: Citizenship in the Making”. His meticulously drawn caricatures have been published in many media outlets and have won many awards such as The 2011 “Press Freedom Prize” from Reporters Without Borders and Le Monde . This is not surprising as his caricatures have stimulated and inspired the thoughts – and perhaps actions - of many people in his country and abroad.

During Ali’s visit to Jeddah, he met up with renowned Saudi artist Ahmed Mater. Ahmed’s first impression of the artist could be condensed in a comment that Ali made:“ Let's speak all languages without a language”. Ahmed was struck by Ali’s ability to not only see the truth in someone’s surroundings, but also its beauty.

“This exhibition will introduce the artistic journey of the artist and caricaturist Ali Farazat -- making him a global thinker as far as his ambitions will take him; and provide a sense of belonging as far as his attachment towards his homeland and principles: it is his belief in freedom” – Ahmed Mater

To accompany the exhibition, Athr gallery will deliver an education program aimed at engaging school and university students in contemporary art. The program will include a talk hosted by Athr Gallery as well as a dedicated workshop on the subject of cartoons and caricatures.